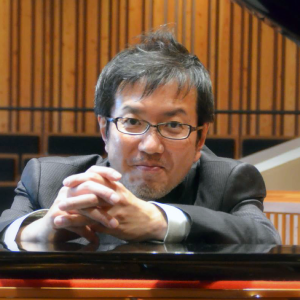 Composer and conductor born and raised in Tokyo. Matsushita graduated at the top of his class from the Kunitachi College of Music, Department of Composition, and went on to study chorus conducting under the late prof. Reményi János, and prof. Erdei Péter in Budapest and Kecskemét (Kodály institute), Hungary.

He is currently the conductor and artistic director of 14 choirs, which are often invited to perform in Japan, Europe, America, Canada, and Asia. They have also achieved excellent showings in the choral circuit and won awards in international competitions.

A prolific composer and arranger, Matsushita’s works are performed around the world. His compositions vary widely, ranging from works based on traditional Japanese music, Masses, motets, to etudes for choirs.

In 2005, he became the first Asian to receive the“Robert Edler Prize for Choral Music” in recognition of his outstanding achievements worldwide in conducting, composing, performance, and education within the field of choral music.